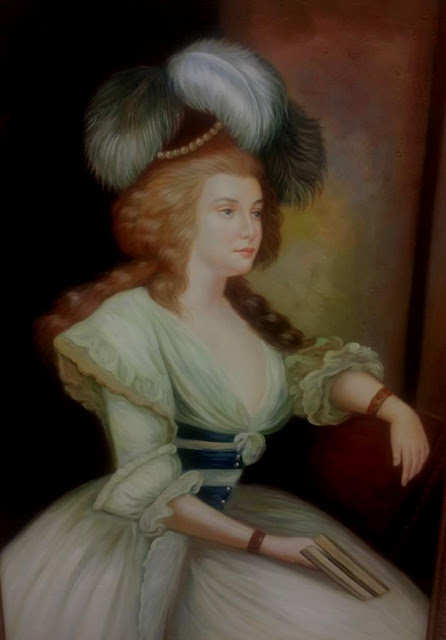 Daughter of the 6th Earl of Traquair


Lady Christina Stuart was born in 1741 in Peebleshire, Scotland and died in Williamsburg, Virginia on 8 Oct 1807. The Norfolk Gazette and Publick Ledger, on Monday evening, October 19, 1807 published this obituary:

"DIED on the 8 inst. After a short but violent illness LADY C. GRIFFIN, consort of the Hon. Cyrus Griffin, of Williamsburg.
This Lady was distinguished for the benevolence of her disposition, and the strength of her mind. The fortitude and resignation with which she met and endured the ills of life, evinced the Christian. -- Her many amiable qualities endeared her to an extensive acquaintance, and she has left to posterity a valuable legacy, in the example of her virtuous and pious life .

Lady Christina’s husband, Cyrus Griffin of Virginia, was elected President of the United States, in Congress Assembled January 22, 1788 serving until January 21, 1789. Cyrus Griffin was born in Farnham, Richmond County, Virginia in 1749 and died in Yorktown, Virginia on December 14th, 1810. He was educated in Great Britain, studying chemistry philosophy, and law at the University of Edinburgh then law at the Temple in London.  It was at the University he became acquainted with  classmate to Charles Stewart or Stuart, Lord Linton, first son and heir of the 6th Earl of Traquair and his sister Lady Christina.

He was a young gentleman of birth and breeding, whose ambition took him to Edinburgh town in Scotland, for the study of civil law. He was tall and handsome, clever and, undoubtedly, ambitious. At the University of Edinburgh, he was popular for his fresh, untrammeled spirit and his bright mind; and we know that he did make friends and that he partook of the social life of the country. Among his friends was Charles Stuart, Lord Linton, son and heir of the Earl of Traquair. When Christmas came Linton invited the Virginian to Traquair for the holidays. Cyrus Griffin accepted the invitation, and then and there the trouble began.
Traquair had three daughters, the Lady Christina, the Lady Mary and the Lady Louisa. Only Lady Christina was beautiful, so beautiful and so fascinating that Cyrus Griffin could not resist her charms; they emboldened him to a declaration, the discovery of which shocked and infuriated the proud house that had extended him an invitation to their Christmas cheer.
Of course, the love making was kept secret; the Lady Christina could but believe that no such denouncement as a matrimonial alliance would be tolerated by her proud father; she knew too well that Linton would no longer be the friend of the bold Virginian when he discovered his sentiment and intention with regard to his sister, who, probably, was already carefully reserved for a noble man of fame and fortune and certainly of social equality.
...  The Earl was, of course, furious when he discovered the clandestine courtship of his noble daughter by the plebeian whom he had allowed to enter his sacred gates. He raved and ranted and the rest of his family, especially Linton, who was the first cause of the mischief, was awed by the probability of such a tragedy overshadowing the hitherto quiet and happy life at Traquair. Cyrus, of course, was never invited to Traquair after his secret was out, but love scorns bars or locks and by hook or by crook the courtship went clandestinely on.
Who was the Mercury who bore the love -letters? What was the secret spot in which they met? We do not know; but the culmination of the romance was a real runaway through forests and over dale, and in the wild escape from Traquair and the Earl, the Lady Christina fell and broke her ankle. Then this solid, sensible young man, worthy of the notice and friendship of a London merchant, took her in his strong arms and bore her over brake and over borne to a parson, who united him and his noble Christina in the bonds of holy matrimony. This act estranged the young lady forever from her parents ...    Robbins, Sally Nelson, Love Stories of Famous Virginians, The National Society Colonial Dames of America in the State of Virginia; Press of the Dietz Printing Co. 1925, Richmond, VA "Cyrus Griffin: The Lover", pages 133 – 141.

News of the courtship and marriage of the Griffins finally reached America through the business contacts of Colonel Richard Adams. Griffin's brother-in-law, upon learning of the noble yet struggling marriage, wrote this letter to his London merchant:
Mr. Cyrus Griffin, who has been several years at Edinburgh studying the law, and we expect at this time is at the Temple, has lately been privately married to the oldest daughter of the Earl of Traquair; and we suppose his lordship may have some struggles to reconcile himself to such a connection with a plebian, we are apprehensive that Mr. Griffin, from this unexpected event, this extraordinary call, may have occasion for more money than he can readily command, especially as he has been so unfortunate as to have some bills remitted him, return protested. I shall, therefore, esteem it a great favor if you will present him the enclosed and give him any assistance in this way in your power. You will find him a solid, sensible young man well worthy of your notice and friendship.
Virginia folklore aside, in June 2022 our visits to Edinburgh, Traquair, the University of Edinburgh Archives and  National Records Scotland, we uncovered numerous primary sources on Cyrus Griffin, Charles Stewart and Lady Christina. 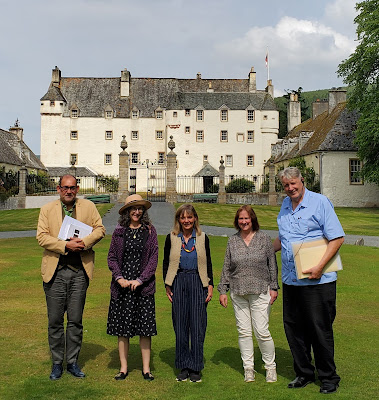 .It is important to note that Mark Muller, QC, husband of Catherine Maxwell Stuart, 21st Lady of Traquair, is in the final stages of completing a book on the Griffin Family.  Marck was very open in sharing his research on the Griffin Family, even alerting us to the April 29th, 1770 clandestine marriage record noted below.  His research is thorough and once his work is  published, the book  will vastly expand and enlighten us on the life of  Cyrus Griffin and Lady Christina.   Also a special thanks to Margaret Fox, Traquair's Archivist who was instrumental in our research on Lady Christina. 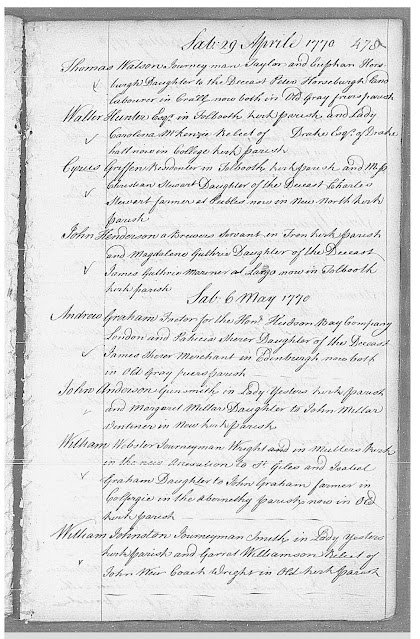 In the register, Griffin is spelled incorrectly as Griffen and Lady Christina has given her name  as Christian Stewart the Daughter of the Deceased Peebles farmer named Charles Stewart.  This is clearly a clandestine entry one would expect of an elopement to insure the marriage not be objected to by her father the Earl of Traquair. 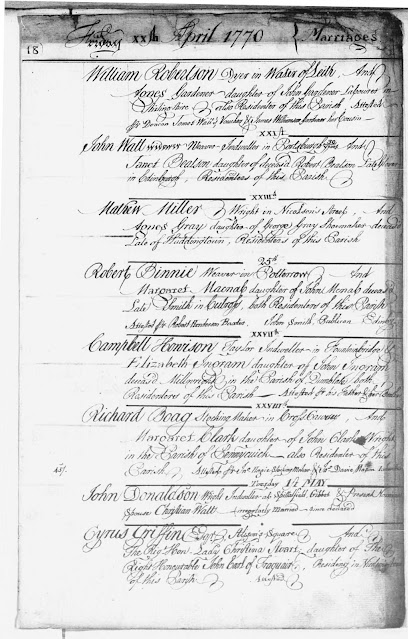 The Griffin marriage blossomed and one year later Lady Christina bore her first child, John on April 20, 1771 at Traquair Castle.  Traquair House provides  a August 3, 1773,  letter from Christina to her father stating "... that they will soon be setting sail from Glasgow for York River in the “Bell.”
A year later, Cyrus would return to London to conduct business for his friend Burgess Ball. In this 1774 letter to Burgess Ball,  Griffin writes that  "My wife is now safely delivered of a stout girl and continues at present very hearty and shall be prepared for the first ship." 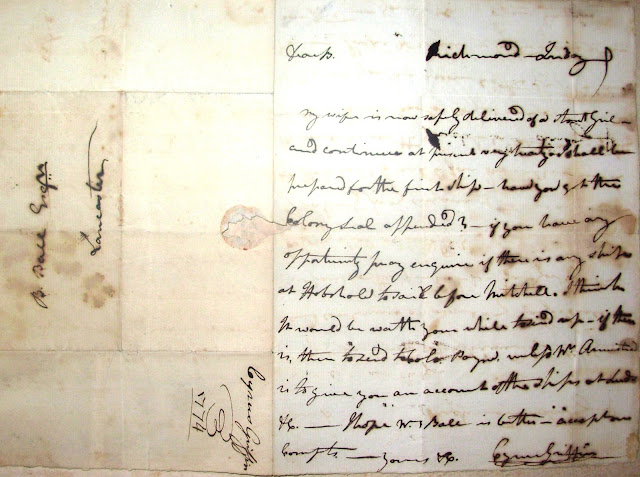 Autograph Letter Signed dated 1774 by Cyrus Griffin to Burgess Ball, in full:   "Richmond, Sunday, -- My wife is now safely delivered of a stout girl and continues at present very hearty and shall be prepared for the first ship - have you got the colony Seal appended?  If you have any opportunity pray inquire if there is any ship at Hobshole to sail before mid-winter I think it would be worth your while to find out, if there is, to lend tobacco payment unless Wm Armisted is to give you an account of the ships at London & --- I hope Wm Bale is better -- accept our compliments -- yours etc -- Cyrus Griffin” Verso:  Burgess Ball, Lancaster [docketed by Ball] Cyrus Griffin 1774".

Fourteen years later Lady Christina would find herself in New York, as the wife Cyrus, who had been elected as the 10th United States in Congress Assembled President under the Articles of Confederation.  The United States was in a transitional period awaiting  the outcome of the States' ratification of a new U.S. Constitution that, if approved, would mean the complete dissolution of the Articles of Confederation Presidency and the entire confederation government.
During this transition, the Griffins social status as President and “First Lady” of the United States in New York were second to none under the Articles of Confederation. Griffin’s office, English education, and his marriage to nobility solidified his standing as the pinnacle in confederation society among the nation's leaders. Lady Christina’s state events held for foreign dignitaries were legendary in New York’s social circles.
After the 11 State ratification of the new U.S. Constitution, Lady Christina's standards of Presidential hospitality were welcome protocols to President George and Martha Washington beginning with the 1789 inauguration festivities. The Presidential installation Broadside published by the new Federal Government marked the end of the unicameral USCA Presidency and the  beginning of  U.S. Presidency and its tripartite political system. The Inaugural Broadside began:

Broadside Announcing Ceremonial for Washington's Inauguration, 29 April 1789
THE Committees of both Houses of Congress, appointed to take order for conducting the ceremonial of the formal reception &c. of the President of the United States, on Thursday next, have agreed to the following order thereon, viz.

That seats be provided in the Senate-Chamber sufficient to accommodate the late President of the United States in Congress Assembled [Cyrus Griffin of Virginia], the Governor of the Western territory [Arthur St Clair], the five persons being the heads of the three great departments [Secretary of Foreign Affairs John Jay, Secretary of War Henry Knox, Commissioners of the Treasury Arthur Lee, Walter Livingston, and Samuel Osgood], the Minister Plenipotentiary of France [Eleanor Francois Elie, Cpmte de Moustier], the Encargado de negocios of Spain [Don Diego de Gardoqui], the Chaplains of Congress [Bishop Samuel Provoost. Dr. William Liin], the persons in the suite of the President:42 and also to accommodate the following Public Officers of the State, viz. The Governor [George Clinton], the Lieutenant-Governor [Pierre Van Cortlandt], the Chancellor [Robert R. Livingston], the Chief Justice [Richard Morris], and other Judges of the Supreme Court [Robert Yates, Jon Sloss Hobart], and the Mayor of the city [James Duane]. That one of the Assistants wait on these gentlemen, and inform them that seats are provided for their accommodation, and also to signify to them that no precedence of seats is intended, and that no salutation is expected from them on their entrance into, or their departure from the Senate-Chamber.

After the inauguration, Cyrus  Griffin and Lady Christina returned to Virginia and in December 1789, President George Washington appointed the former USCA President as the first Federal Judge for the District of Virginia. In that capacity, Griffin decided many important cases including joining Chief Justice John Marshall in presiding over the treason trial of Vice President Aaron Burr.
Lady Christina, aged 66, died on October 19, 1807.  Cyrus Griffin continued to serve as a federal Judge until  his death, aged 62,  in Yorktown, Virginia on December 14, 1810.  He was interred with Lady Christina  in the Bruton Churchyard, Williamsburg, Virginia.

The Congressional Evolution of the United States of America

Presidents of the United States of America

Capitals of the United Colonies and States of America

Book a primary source exhibit and a professional speaker for your next event by contacting Historic.us today. Our Clients include many Fortune 500 companies, associations, non-profits, colleges, universities, national conventions, PR and advertising agencies. As a leading national exhibitor of primary sources, many of our clients have benefited from our historic displays that are designed to entertain and educate your target audience. Contact us to learn how you can join our "roster" of satisfied clientele today!

Primary Source exhibits are available for display in your community. The costs range from $1,000 to $35,000 depending on length of time on loan and the rarity of artifacts chosen.

No Taxation Without Representation

US Bill of Rights

*** President of the Confederate States of America